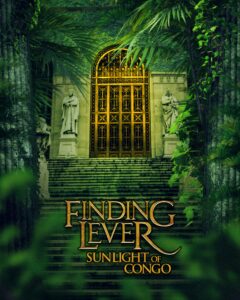 From humble beginnings in Northern England to the heat of the Congo he built his Empire.

In 1911, after signing an agreement with the Belgium government, Lord Lever established palm oil plantations, but at what cost?

A school trip to a museum opens the door to the past meeting the present; What has 100 years taught us, has today blurred into yesterday?

A pithy and humourous script by Kai Jolley takes us on a journey never to be forgotten.

Christopher Lee Power grew up in Wirral and studied acting at Richmond Drama School in London and was awarded a Diploma in Acting from Oxford University in 1996. He also attended the Lee Strasberg Theatre & Film Institute and RADA. Christopher directed A Midsummer Nights Dream last year. He is playing Dr McCarthy in One Night With Marilyn . Christopher can be seen in For Love’s Sake on Amazon Prime as Colin Jarvis who is head of social services. He has just finished filming AS as Michael who is a politician with Asperger’s, Macbeth in King Macbeth, and filmed the ron -com  “ITILY” playing Michael which was directed by Agnes Fernandes.
He built a successful career as a theatre actor in the North West of England, his memorable roles included Shakespeare- and Chekhov-characters ranging from Polixenes, Claudius, Mark Antony, King Duncan to Astrov in Uncle Vanya. He toured in London with ‘A Midsummer Night’s Dream’ with the ‘Young People’s Shakespeare Theatre Company’ as Quince and Egeus.  He also played  King Duncan in Macbeth at St George’s Hall in Liverpool. He filmed 9 episodes in Season 3 of the children’s TV drama Jovis and played the lovable villain Mr. Bosanti Crayco. His other TV credits include Coronation Street, Titanic- Birth of a Legend (ITV), Hollyoaks, and Mystery Files (Sky TV). BBC Real Stories (Lawyer) Channel 4s The Courtroom and Mark Antony in a short thriller film called Caesar.

Rupert has over 35 years of experience in International Television and Home Video Distribution, both in sales and acquisitions. In the early days, he represented Thames Television International (bringing Kojak and The Silk Road to ITV), NHK Japan, FMI & SFP in France, and RTVE in Spain.

For over 20 years was Director Of Acquisitions for Kultur International Films, sourcing product, creating co-production deals, and instigating niche marketing for the North American performing arts label from the major opera houses, broadcasters and distributors around the world, not only including Royal Opera House, Opus Arte, C-Major, Arthaus, Unitel, BBC, ITV Network, INA, The Globe Theatre, and Riverdance; but also many independent producers and distributors.

He was also responsible for acquiring the exclusive Home Video rights for premiere sport events such as Formula 1, Wimbledon Tennis, Moto Gp, and Le Mans for home video distribution in North America.

Originally trained at Kingston Art School, he cut his teeth at Richard Williams Animation and went on to work on music videos as cameraman/editor in the early 1980’s, with a brief spell as an International DJ in the Middle East and Europe working in 5-star NightClubs before becoming assistant to Renee Wilson and entering the world of distribution.

Ellaika Villegas has experience in theatre productions and is a featured artist in commercials, tv, and film. After 3 years she graduated with a 1st Class Honour from Edge Hill University where she studied (BA) Drama, specializing in Meisner, Brecht, and Stanislavski. Her skills and interests are piano, aerial, and sewing.

Sinead Renaye is a young actress based in Liverpool with a passion for all things theatre, most recently appearing in the comedy “Hey Bunny get Loose” at Liverpool Royal Court’s Studio. She has been working in the industry over the last year after graduating from LJMU in 2021.

Sam Bolton, 23, is a writer and director based in Chester- however, he loves acting when he gets the chance, having played leading roles in The Laramie Project, DNA, and The Winslow Boy. He is also featuring in an original series, Birchall’s Pints, which will be streaming on YouTube later this year. This will be his first time performing on stage in over two years, and he couldn’t be more excited to return to it.

Gavi is an actor, director, producer, singer, polyglot, comedien(ne), model, dancer of Afrikan freestyle, and founder of the Okello actor technique. They were born and raised in Rock Ferry of Duffy, Merseybeat and Scouse fame and Wigan of George Orwell, Northern Soul, and pie fame.  They have Anglo-Cymreig-Éireannach and Joluo ancestry, a people of western Kenya who claim Lupita Nyong’o and Barack Obama as members!
They lived for five years in London, where they trained in the Meisner technique, gained a BA in Russian and Spanish, and had their first taste of the industry. Highlights include a glowing Guardian review for their Edinburgh Fringe one-person show, Auntie, seeing their face on the Piccadilly Lights, and a short BBC Three documentary about their cherished friendship with an older Ghanaian auntie, which touched the hearts of over eleven million viewers globally.

Anita N Kuambana is a Marketing and Multimedia Coordinator who has a love for acting and singing. She has partly taken in the doorsteps performance “The Summer folks” put together by the Liverpool Lighthouse, and she has “toured” around Anfield taking Summer to the neighborhood.

Performed in AmDrams and Youth Theatre for many years, including several Shakespeare Plays. Did a Level 3 BTEC in Performing Arts at the City of Liverpool College 2012-14. Was a member of the emerging artist’s program with Hope Street Ltd in 2014. Have an Undergraduate Degree in Drama with Liverpool Hope University 2016-19.
This will be my first professional acting credit.

John Reynolds
James Leverhulme
John is a Liverpool-based actor who has been volunteering with the Cottage Theatre Company from the age of 7, and made his professional stage debut last year playing Bottom in A Midsummer Night’s Dream at the Gladstone Theatre. John is also a producer at Some Guys With A Camera, a young filmmaking group that has made several independent short films and most recently created the comedy web series “Birchall’s Pints” in which John played one of the lead characters, William Birchall.

Lineu Kuambana
Mandla
Lineu N Kuambana is a bricklayer and construction worker who has a passion for acting and music. He has performed as pharaoh for * Moses and the red sea * and also played Tom (magic carpet) * Aladdin *

Norma N. Kuambana
Roshaun
Norma N. Kuambana is an accountant who has a great passion for business, music, and acting.
Norma holds a large experience in marketing and selling; this allows him to communicate effectively.